Now that I’ve owned some of my X-Wing ships for over two years, signs of wear and tear are occurring. One component of my ships that is particularly starting to deteriorate is the small tube of plastic connected to the ship into which the flight pegs are inserted are cracking and/or loosening to the point that they don’t rest snug on the flight pegs anymore. With a modest investment in some magnets, however, this can be easily fixed.

For small-based ships, all you need are some ring magnets and stainless steel balls. Measurement-wise, the ring magnets I’ve seen used and used myself have a 1/4” outer diameter, 1/8” inner diameter, and a 1/8” thickness. There are likely many places online and in-real-life where you can buy them but I got mine from a site called K&J Magnetics (their SKU# R422). 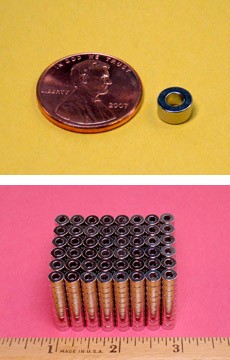 To go with the ring magnets you’ll need some 3/16” stainless steel balls. K&J sells them but, because they’re relatively heavy for the size they are, will only ship them via UPS to Canada. However, within five minutes of searching on eBay I was able to buy a bag of 100 from Hong Kong which, to my door, was under $10.

Once the glue has dried, simply place the steel ball into the ring magnet and you’ve got a ship resting on a pivoting joint like so:

Not only is this a more hale and hardy flight peg but it allows you to have some fun and “pose” your ships during game play. I find that all the ships being perfectly aligned at 90 degrees in three-space gives them a bit of a stagnant look. Being able to put them at dynamic angles gives some life to them. For example, here are four Rebel ships as they sit on their stands out-of-the-box:

Here are the same Rebel ships with magnets installed and re-posed:

Seeing those two pictures side-by-side reminds me of the stoic, posed family photo and then the “OK, do whatever you want” photo. Here are some Imperial ships in the same contrasting scenarios:

I have seen some large-based ships tricked out with larger magnets but I’m reluctant to do that to mine. With the exception of the Aggressor, the larger ships are heavy enough to fall over unless you have a really strong magnet holding it in place. That doesn’t seem to bother R5Don4 but that guy is a bit mental.

Re-posted with permission from engler.ca

2 thoughts on “Always With The Magnets”