Just over a week ago I sat down with our Armada National Champion Kristjan to play a game of Rebellion, using my fully painted set. Kristjan wanted to play the Imperials – no surprise there as he loves running Imps in Armada. He also has a tendency to goose step and shout orders when under stress, so that might explain his Imperial love affair. I was more than happy to play the Rebels since, like a normal person, they were the side I rooted for in the movies.

Our game took all afternoon and went into the night. There were lots of breaks and time spent just chatting, so that’s why it took so long, and in my opinion how one should play! I apologize for the lack of good pictures and the dark ones at the end as it was night when we finished. We were enjoying the last days of Indian Summer and played outdoors.

After the forces were set up, I just had to put the Rebel Base on Hoth. I’m a sucker for theme when I play Star Wars games so I couldn’t resist, especially since Kristjan had talked to our friend Yik about a game where I put the Rebel base on Yavin. Kristjan was saying how cool it was that the base was on Yavin so I thought to myself, “it will be even cooler on Hoth! Oh the puns!” Deploying on Hoth was pretty risky as Mustafar, directly beside it, was a Loyal Imperial system with a reasonable force.

After playing Rebellion previously, I knew that the Rebels couldn’t afford to loose units without gaining something back. Spreading them out across the map would be a waste of lives so I decided to deploy the Alliance at Nal Hutta with a small force back at the base. The Rebels cut a deal with the Hutt gangsters, trying to blend in with the other undesirables on the outer rim.

I was hoping that this deployment, as well as Mon Calamari openly declaring for the Alliance, would draw the Imperials to the north of the board and away from Hoth. Still, everything would go pear shaped if Kristjan decided to hop over to Hoth and have a peek. I was gambling that he wouldn’t, at least for the first few turns, and I was  curious to see how my strategy would play out.

The Rebels were running sabotage missions, and sabotaged Mustafar often. This helped in stopping units from deploying in that corner of the galaxy.

During one of those sabotage missions General Riekeen (who Kristjan would hilariously pronounce “Ree-ah-khan” in a Jamaican accent) was captured by Darth Vader on Mustafar and placed in carbonite. It was a blow to the Rebellion and they lost a reputation.

On the following turn Leia and a new Rebel recruit, a young farm boy called Luke Skywalker, went on a mission and rescued him (also pulling an objective card to boot). This success allowed Luke to search the mission deck for the Seek Yoda card and travel to Dagobah. Everything seemed to be going according to plan until Boba Fett showed up. 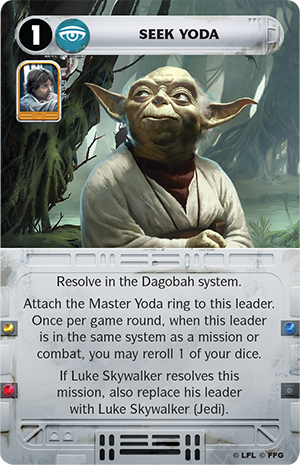 On Dagobah Luke trained to be a Jedi but unbeknownst to him Boba Fett, the most dangerous bounty hunter in the galaxy, was on his trail. The Empire, aware that a son of Skywalker was alive, paid an outrageous sum for his capture. As Luke completed his training with Yoda, Boba Fett landed Slave One in the swamps of Degobah and began his hunt. Yoda silently watched Luke gather his things. He had sensed the bounty hunter for some time now. Luke’s failure in the cave and his eagerness to rush off for adventure weighed heavily on Yoda’s mind.

“Ready he is not. Reckless he is. Greater faith in the force needs Luke,” thought Yoda. “A final test, will be this bounty hunter. Redemption, understanding, connection to the force Luke must find or suffer his father’s fate he will.”

As Luke travelled back to his X-Wing, Boba Fett set a masterful trap. Launching an exploding rocket from his jetpack, he caused Luke to drop his lightsaber. Then falling from the trees he entangled Luke with his fibercord whip.

When all seemed lost, something strange happened. Luke stopped struggling and closed his eyes.He calmed himself and felt the force – it was all around him.

Instantly the light saber came to his hand. In a flash he cut himself free of the firbecord and launched a counter attack. The young Jedi deflected laser bolts, force jumped to close the gap and chopped Boba Fett’s blaster in two. All the bounty hunter could do was rocket away in defeat. The Jedi had beat him. The Empire was getting suspicious of the sabotage missions being run near Ilum so it sent Wolf Yolarin to investigate. Even though the Rebel base was not there, it was a terrifying card to see as the Rebel player! The Empire then moved on to Dathomir and began construction of a second Death Star. The good news was the Empire had set it’s focus on the wrong side of the galaxy, for now.

Meanwhile, as the Rebels I played Base Defenses for thematic reasons. I mean, come on, the base was on Hoth and this card pictured Hoth! I even put my snowy Ion Cannon (I have a Forest Moon one and a Desert one) on the rebel base space along with the shield generator. Now the base had everything, even some snow speeders. It was right out of the movies! 🙂

There were a lot of units in the base (10!), and the Empire tried to Gather Intel but was thwarted. They now believed the Rebel base might be on Yavin so they moved the Death Star and a small fleet there to investigate. The Rebel Alliance was very worried about the second Death Star coming on line. Surely the Empire would be unstoppable with two technological terrors? Not to worry, General Dodonna had a plan.

Chewbacca led a Rebel Strike Team on a hit and run in the Yavin system, destroying some TIEs. Then Jedi Luke did a covert operation there and was challenged by Wolf Yolarin.

However, this was all a prelude to the final attack. Chewie was in system to protect against captures, Luke was there to boost the intel score and add a re-roll for one of the best cards the Rebels have, Plan the Assault. General Dodonna showed up with a Mon Calamari Cruiser and a small fleet of snub fighters. The Rebels managed to blow up the Death Star because they had the secret plans to the space station.

“All Wings report in. Now lock onto the strongest power source, it should be the power generator.” All was not lost for the Empire, even though sympathy for the Rebel cause was spreading across the galaxy. The Empire believed that the Rebel buildup at Nul Hutta meant the base was on Kessel. They moved a huge fleet along with the 1st Death Star towards the planet.

Rebel intelligence had just acquired the plans for this Death Star as well and was instructing it’s pilots where to aim their proton torpedoes. More Rebel ships poured into the system preparing for battle.

Kristjan was running out of time and was convinced that Kessel was the Rebel Base, thinking the units were on Nal Hutta for protection.

He had amassed a huge fleet – all the Star Destroyers were on the board, many of them moving towards Kessel.

One turn before he was set to attack, Kristjan drew the Kessel probe card and his face dropped.

“What card did you draw?” I asked.

“You know what card I drew.”

We were both laughing at this funny turn of events. The bluff had failed!

On the final turn of the game I saw that Malastare, a Subjugated system loyal to the Rebellion, only had 1 storm trooper garrisoning it. I played Incite Rebellion. The 3 rebel Troopers freed the system, removed the Subjugation token and allowed the Rebels to score a victory point. Moving second, the Empire launched an attack against the Rebel Fleet at Kessel, smartly leaving the Death Star behind. The Rebel fleet was caught off guard and destroyed. Only a single squadron of X-Wings escaped, witnesses to the great slaughter of their friends and comrades in arms!

This was a gross mistake on my part, and it was sad to see all those pilots die for nothing. I should have moved them first at the beginning of the round instead of freeing Malastare.

Time was running out, and so the Empire moved masses of troops to Alderaan, but the Rebel Base was not there either.

Darth Vader, Lord of the Sith, exited his meditation chamber and made his way towards the holographic map. Nervous generals held their breath when the helmeted skull face passed them by.

Vader stood and stared at the map, more like a statue of death than a man, eerie blue light reflecting on his jet armour. Minutes passed, everything fell silent except for the black suit’s life support which breathed and hissed.

Then Vader raised a finger, pointing to a dot on the map, “That’s it. That is the system. The Rebels are there and Skywalker is with them!” He was pointing at Hoth.

Kristjan put Vader on Hoth and sent everything he could from Mustafar over for the fight. The Empire had finally found the Rebel Base and Luke Skywalker was there to lead the defences!

It was a hopeless battle in space, the Ion Cannon completely shut down the lone Gozanti and the Mon Calamari Cruiser made short work of it.

On the ground, the Empire fared much better. It was a close battle. Vader proved to be strong in the force, drawing great damage cards. However, Luke called down an orbital bombardment, finishing off the last threatening At-St.

Then in the snowy caves of Hoth near the Rebel Base, Luke confronted Darth Vader. He turned Vader from the Dark side back to the Light and peace to the galaxy was restored. The Galaxy was free! The celebration on Hoth lasted for days. After all, it’s a planet where you always have ice in your drink 😉