I had my heart set on a Blaise-Trooper list as it was all the rage. However, as most know, I don’t like to play meta. I found it very boring. I’m more of a run and gun player. Taylor Hanson suggested I try this scum list he had been toying with.

I started playing around with it and made some tweaks, figuring I would need a list that could take out Stormtroopers easily and could handle white die dodge rolls. 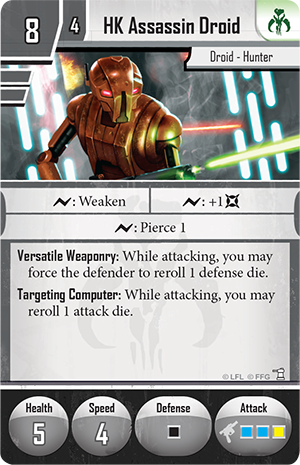 HK Assassin Droids are perfect for both jobs with their ability to re-roll an attack die and make an opponent re-roll a defence die. I made one set include Explosive Armaments, to make use of any double surges and to do extra damage to swarming trooper lists.

Otherwise, I would need a good brawler like Bossk and a sneaky medium hitter like Greedo to match my style. The missing link was filled in with the “Rebel Care Package” of Gideon and C-3P0, and a set of Hired Guns with Last Resort to cause some havoc when needed and to threaten some objectives. 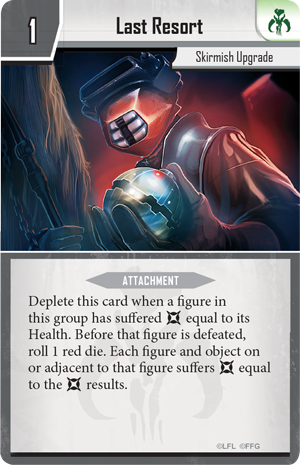 So now I had figures who could move fast, hit hard, and hit from far away. For the command deck I went with some obvious cards. Trandoshan Terror is a must for Bossk lists as having that extra yellow die to damage on trooper lists using Indiscriminate Fire is insane. 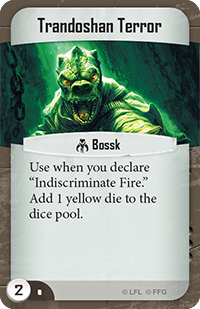 Take It Down is mainly in there because there really isn’t a good 3 point card to take with this list. 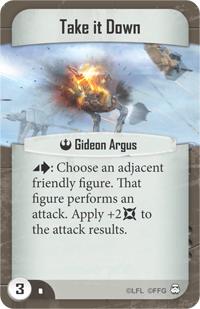 Inspiring Speech and Single Purpose are great ways to get some extra focus for the squad. Focus is huge in this game, and any extra is marvelous! 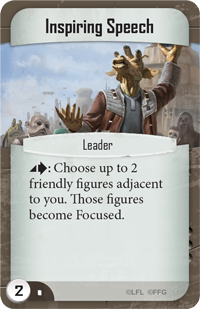 Planning is great in lists with a leader like Gideon, but I find now cards like Tough Luck and Element of Surprise are great against troopers or Jedi lists rolling white dice. 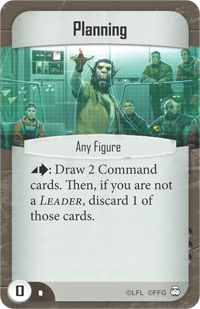 Negation and Take Initiative are also must take cards nowadays to help with initiative theft…both ways. 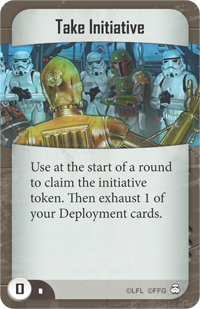 Stealth Tactics is a nice card to throw in when one of your elites is in a jam and about to get attacked by some strong dice. 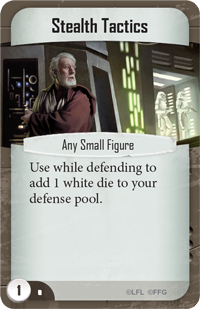 To the Limit and Primary Target are also great for a beast like Bossk, who can go hunt the opponent’s tougher figure. 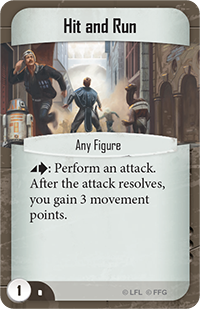 Finally Black Market Prices is a solid card to use if Greedo or the Hired Guns have a free action and Jump Jets and Hit and Run are awesome for making surprise attacks, especially on maps with difficult terrain.

Really I wanted it so that the cards are not totally favouring any one figure, which makes getting cards a bonus at any time. I found it worked out well, as my squad often had a lot of options with the command cards I’d get each game.

The following are the individual game reports. I’ve tried to include the general plan and engagement on each map. I’ve made my opponent the RED arrows and mine the GREEN arrows. I decided to take the Red Zone so that I could use my HKs to fire down the long snowy hallway. If he wanted to come and move some objective tokens, he was going to pay the price. He tried to bring Inquisitor through the middle to take the terminal, but I changed focus onto him and took him out by the beginning of round 2. From there he was fighting an uphill battle as we exchanged objective points and I was able to hang on for a close victory 13-12. Round 2: ISB Headquarters – To Your Stations I was extremely lucky and pulled Single Purpose and Inspiring Speech! This means that no less then 5 of my figures started the game with focus. I decided to commit to taking the objective tokens with a focused Greedo and a focused Hired Gun. I knew he wouldn’t want to challenge them. I also had Trandoshan Terror, which I used after moving Bossk up to take a shot at his group that was pretty bunched together. I was also able to get some long range shots in with the HKs and this game was well over before round 2 had ended. We stopped keeping score, but I’d guess it was somewhere near 30’s for me and single digit for him. Round 3: Coruscant Landfill – Lair of the Dianoga This was one of my biggest mistakes of the tournament. I came out guns a blazing putting heavy damage on the Diagona early. Before my opponent could really get in on the action, I had killed the Dianoga and led 20-5!!! A smart, seasoned player would probably spend the next few rounds staying away from their opponent, but for some reason that didn’t cross my mind. I engaged him and he clawed his way back to win 21-20! Needless to say, I realized my mistake soon after, and also that I would have been 3-0 had I not been so absent minded. I think I just got excited and possibly cocky? Round 4: Coruscant Landfill – One Man’s Trash My game plan here was to focus up the HKs and have the rest of the squad blow the door so that the Hired Guns could run it at end of round and grab some objectives. When the next turn came around, I made the silly mistake of NOT MOVING my Hired Guns right away.

I’m not sure why I went away from my plan, perhaps again it was me being overconfident. However, the back up plan worked that if he does go after my figures inside the compactor, my HKs would have some nice shots across, which they did. He made a valiant effort to keep up with my squad’s speed and ability to do him damage, and kept the game close. In the end, the extra objectives that I obtained sealed the victory and I won 23-21. This map in general is built for my squad, so no matter the scenario, I always have a good chance of winning. This game I can say that I was mainly unprepared for a double Bantha list. Normally I would stay calm and just keep shooting a Bantha, and with my firepower, it should be easy to take one down.

However, he was able to do so much damage with 2 of them that I was having trouble keeping up. Probably the worst part was when he used his Gideon to command his Bantha from across the board to perform a move and thus trample my squad! I kept the game close, but he ended up winning by 1 point 23-22 (I think). I made quite a few mistakes. One big one was that I sent in a focused Hired Gun who he killed as I stood next to C-3PO. I attacked, but forgot to use Last Resort!!! That would have killed C-3PO and done some damage to an adjacent HK. This game also threw me for a loop. It was the first game I’ve ever played against an opponent with a 39 pt squad. I see why. He took initiative and selected the Red Zone. He sent in his Wookies to grab the 2 closest objectives to him and then ran. I tried to do some damage with my squad but those Wookies are tanks! He would just shuffle them around and slow played his way to a 18-9 victory. Overall, I had an amazing time! There were 97 of the best players in the world and I really felt like I held my own. I had some close losses where I made some major mistakes that proved to be costly. I finished with a surprising 3-3 record good enough for 42nd place overall. Considering I would have been happy with 1 win, I was overjoyed!

I find the nuances in this game completely insane and I tend to feel this sense of excitement. The difference between a win and a loss can be so minor, but that time flies by at the World level.